A programming language is a human-readable way of telling a computer what to do. Any language uses a series of symbols that represent precise instructions for a computer. The combination of these instructions creates a program. There are thousands of programming languages, and new ones keep being created. This means you have many possible ways to build your website. With so many options, how can you make the right choice 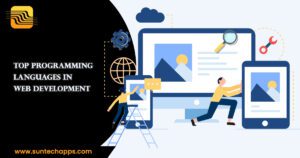 Python is the fastest-growing programming language, with Django and Pyramid as its most popular frameworks. In 2018, Python showed a 456% growth in popularity over the previous year, and its consistent rise continues.

Python is known for its many web-oriented frameworks that help developers create functional apps. The most popular are Django, Pyramid, Bottle, Flask, CherryPy, WebApp2, and TurboGears.

Django is used more frequently than other Python frameworks because it has tools for building web apps faster and with less code. This toolkit helps developers easily add main website components like authentication, management panels, and structures for file processing. Without Django, a developer would have to code all these traditional features manually instead of focusing on new components.

Programming with Java is popular especially for banking and FinTech web projects since, compared to many other programming languages, Java offers better security and functionality.

According to the PYPL index, Java is now the second most popular programming language, behind Python and followed by Java Script.

ThePHP programming languageis dead only if you ignore usage statistics. Though PHP isn’t modern, eight out of ten websites are built using this language.

Laravel is the most popular PHP framework. It’s an elegant toolkit with a rich set of features that boost the speed of web app development. Laravel gives developers access to functionality like caching, session management, and authentication. This allows developers to skip much groundwork, especially when developing a website from scratch.

Ruby is a dynamic scripting language with high-level syntax. It was created to strike a balance between imperative and functional programming and make code look more natural. Ruby is straightforward and reads like English, making it a popular choice among beginners.

Like Python, Ruby is a general-purpose language and is mostly used for creating web applications. But theRuby programming languagealso has other applications including prototyping and data analysis.

JetBrains states that the JavaScript client-side programming language is the primary choice for dynamic web page development. To date, JavaScript is used by 98.8 % of all websites.Best Languages for Web Application Development.

HTML and CSS are programming languages paired to build the front end of a web application. They can be complemented by JavaScript.

HTML is the basic building block of an app. This language dictates the structure and contents of a web page. The main disadvantage of HTML is that it can’t help developers make web apps interactive. To enhance HTML pages with an aesthetic style and interface prompts, add a design, and display all HTML elements, developers use CSS. Check out the specific uses of the HTML, CSS, and JavaScriptweb application development languagesbelow.