An integral part of any development process is quality assurance. Developers can use it as a sanity check to make sure that whatever they’re developing is bug-free and works seamlessly. QA Engineers used to perform all tests manually, meticulously checking a product over and over until they were sure there was nothing left to fix. Even though such an approach was dedicated and rather functional, it had frequently proved to be inefficient and time-consuming

Fortunately, things have improved since then. The number of tools for automated quality assurance testing has grown dramatically in recent years: Robotium, Espresso, UI Automator, Selendroid, Testdroid, Calabash, and so on. However, after trying dozens and dozens of tools, we, here at Suntech Application ., came to the conclusion that Appium is the best choice when it comes to high-quality automated testing. The purpose of this article is to provide our reasoning for making this choice, so you know why we use some particular tools when developing your projects.

First, we’d like to start with a table comparing the most popular mobile automation tools. 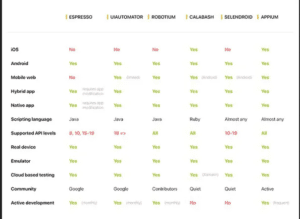 As you can see, Appium has far more advantages than do the other tools available on the market. However, it’s definitely not perfect. Any given instrument has its strong and weak sides, and we’re more than happy to tell you about Appium’s .

How Does It Work?

Appium is a web server that uses REST APIs and is built using Node.js. The web server has a client/server architecture that offers a wide range of features to users. Tests can be created using any programming language that is compatible with Webdriver, and they can be executed on any computer (not just the one that has the server). The server can either be installed using npm (a JavaScript package manager) or built from source code.

Appium manages devices with the help of automation instruments that are native to the particular operating system – UIAutomator for Android and XCUITest for iOS (version 10 and higher).

Example of an Appium test –

Now let’s look at an example of a simple Python Appium test. This tutorial shows how to automate mobile applications with common features and actions. First, let’s create a Python file. Despite the fact that Selenium/Appium Python language bindings already offermany features, we’re using some custom-made functions for this test, so we’ve included several additional librariess.

After you’ve done all that, you can create a ‘test’ method, which performs an application login and navigates to a certain page of the application. In the code snippet below, we have already opened an app by using setUp. A few verification actions are included in the last part of our ‘test’ method. In the script, inner text is extracted from the element on the page, a GET request is sent to the API, and then its content is read. Afterwards, it compares the text it had previously extracted from the page and the response it received from the API.

Despite its limitations and the general complexity of configuration, Appium is a perfect tool for automating mobile tests. It has many common features, is easy to integrate with other systems and frameworks, and supports a lot more devices and programming languages than its competitors. As an added bonus, an Appium community with a wide range of active members saves users from having to spend time troubleshooting unnecessary problems, while continuous development and frequent updates help to eliminate countless bugs and other problems