One of the most popular mobile app development frameworks, React Native was introduced by renowned organization Facebook to build robust mobile apps. What has made this framework popular among the developers is the programming language it uses i.e., JavaScript.

According to a survey, JavaScript or JS is one of the most famous programming languages for the past 8 years. React Native has vast community support and requires fewer team members for app development.

The reason behind it is that React Native supports a single codebase for multiple platforms and operating systems.

Architecture – React Native works on the flux architecture that ensure unidirectional flow of data. Also, it needs a bridge to communicate with the native modules. 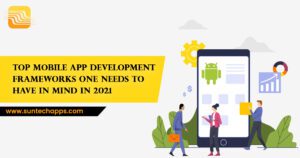 Flutter is an open-source mobile app development framework for creating native applications. What makes this framework unique is the use of the dart programming language. Developed by the tech-giant Google, Flutter is now managed by an ECMA standard.

Flutter’s specialty lies in its vast range of in-built components with almost all the technologies required for efficient mobile app development. With features like hot- reload and usage of the minimal codebase, this framework enables fastening of the entire development procedure.

It is one of the mobile app development frameworks that is opted by developers who are efficient in working with .NET. Xamarin is an open-source framework and is used for building apps not only for Windows but for platforms like iOS and Android.

What makes this framework standout is that it allows developers to use the single C# codebase for different platforms. You can write the business logic in one programming language and use it for iOS, Android, or some other operating system.

The basic purpose of Xamarin is to extend and enhance the .NET developer platform. It does this by adding libraries and tools to the platform.

Moreover, one of the major reasons to trust this framework’s functionality is that it is owned by the world’s premium tech organization “Microsoft.”

Architecture – The entire codebase of Xamarin’s architecture is written in C#. Xamarin allows building native UI for cross-platform app development. Additionally, .NET being the base of Xamarin, helps in garbage collection and memory allocation.

One of the most easy-to-use mobile app development frameworks, Swiftic allows you to create your app. It is a DIY app maker that requires no or minimal code. The developers don’t need to dive deep into coding while using this framework.

Although, it also tests the developer’s creativity as it comes with many ready-made components and features. Its user-friendly interface is a plus point, along with smooth navigation. Also, you can develop the app in a comparatively lesser amount of time.

Enriched with tools like Advance Analytics, social and media feed, expert help, and app promotions, this framework is a one-stop solution for developers who can build apps that meet the customer’s demands.

Thousands of small businesses around the globe have opted for Swiftic who can’t afford a team of high-paid developers.

Ionic is an open-source, cross-platform mobile app development framework introduced by -Max Lynch, Adam Bradley, and Ben Sperry, of Drifty Co. It comes with a bunch of pre-designed UI components that are created to look appealing on different mobile devices.

Also, Ionic’s special feature is its developer-friendly tools for creating, testing, and deploying mobile applications. The CLI or command-line utility of this framework can be easily installed by using NPM.

If you are well versed with Javascript and HTML, then using Ionic will be much easier for you.

JQuery is a mobile app development framework used to build responsive apps within a lesser amount of time than other frameworks. According to stats, jQuery mobile’s market share in the mobile development industry is 16.29%.

It is also seen as a JavaScript library to develop framework-compatible apps. Also, it enables seamless integrations with other frameworks. What makes this app unique is it allows developers to build a single app that can work on all the platforms like desktops, tablets, and smartphones.

Thus, JQuery helps in saving time for the developers. Its theming framework provides you with options for choosing themes for a customized and personal experience.

Developed by the jQuery project team, this framework is based on HTML5. If you are well-versed with Javascript or jQuery, using the JQuery Mobile app framework would be easier for you to build interactive web pages and applications.

Adobe PhoneGap uses HTML, CSS, and JavaScript to create applications for mobile platforms. It is owned together by Apache and Adobe. When Apache acquired this mobile app framework, it was renamed “Apache Cordova.”

The core purpose of this framework was to reduce the complex coding procedure required to develop cross-platform apps. Since Adobe PhoneGap has a smooth learning curve, you can use this framework if you are well-versed with simple programming languages like JavaScript.

Organizations like Wikipedia use Adobe PhoneGap to create apps that give a native experience. Additionally, this framework bridges the gap between hybrid and native apps.

Although, you want to develop a heavy gaming app, Adobe PhoneGap might not be a good choice.
Apps built using Adobe PhoneGap-
HealthTap, Wikipedia, TripCase